August has come and gone and as usual there has been lots of progress in the jungle with some exciting sightings around the reserve, new additions to the animal release program, the completion of the collection phase of the turtle project and much more. Once again the problem lies in where to start...

I recall that last month I informed you about the successful commencement of the turtle project earlier than in previous years. These extra days for nest collection gave us every chance of breaking our records from 2005 and 2006 with regards to the numbers of nests and eggs collected. Still the weather in August did its best to thwart our efforts with some long "friajes" (cold weather spells) and strong storms that certainly would have disrupted the turtles' nesting behaviour. Nevertheless I am proud to report that throughout these tough conditions staff and volunteers persevered in the nightly patrols of the beach and we have smashed the previous records by collecting 55 nests and around 1400 eggs. So great were the numbers that we had to build an emergency artificial beach to deal with the eggs that could not be incubated in the original one. The total is almost the sum of the two previous years and a great indicator of how hard everyone has worked this year on the project. Now we wait for the eggs to hatch in around 60 to 90 days but I am confident we will have a high survival rate as the nests were handled well and swiftly transferred to the artificial beach built on the river back in front of the farm. I expect to be informing you of our first hatchlings in October.

Elsewhere at Taricaya we were busy finishing the juvenile cages in the animal release program and the first residents are now safely installed. The first was our baby Red howler monkey (Alouatta seniculus) who is happily swinging around on his new ropes and enjoying the view from his new home. The second inhabitant of the new enclosures is a new addition for us in the rescue program and takes the form of a two and half meter Red-tailed boa (Boa constrictor). This giant snake, known locally as a mantona, was given to us in Puerto Maldonado and we do not plan on keeping it long. As usual, new residents at the centre need to pass a period of quarantine to ensure that they will not carry any diseases out into the reserve that could infect and damage our wild populations. Once the period is completed we shall release the snake as it is obviously big enough to look after itself!! 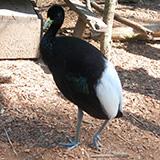 Still were able to release some of our other residents and as always it is hugely satisfying to open the door and let the animals return to their natural surroundings. This month it was the turn of some of our avian inhabitants and so we were able to release a Blue-headed Parrot (Pionus menstruus) and our three Pale-winged Trumpeters (Psophia leucoptera). The trumpeters were long term residents at Taricaya due to the fact we were hoping to receive more of them enabling us to release a larger group. These beautiful birds are rated as vulnerable on the CITES list (Convention on International Trade of Endangered Species) and as such are locally extinct in many areas of the Amazon. We have sighted wild groups a few times over the years but the larger the group we released the better their survival chances. However these birds had been residents for nearly two years and since no others were presented to us they needed to be released. Also, I was starting to get worried because the unnatural conditions meant that they had not mated and their behaviour was starting to modify the longer they were kept in captivity. It is with great pleasure that I can now report their successful rehabilitation into the reserve, although they still spend the majority of their time in the area surrounding the lodge, and even more encouragingly we are noticing that two of the three are starting to perform breeding displays. It would appear that their newfound freedom has triggered some internal response and I am quietly confident that they will mate soon and start the recovery of the wild numbers of these endangered birds.

August saw us reopening our mist nets after a short break and this month took us back to the sampling transects on Island and Rio trails. Some of you may recall that Island was one of our best sights for bird diversity as the stands of bamboo yielded some wonderful birds in previous studies. Once again we were not disappointed as we had a high number of recaptures (birds we had previously ringed) and some of our old favourites were recaptured. Perhaps the most exciting of these was a male Rufous-headed Woodpecker (Celeus spectabilis), a bamboo specialist that we had caught previously. The exciting element to this capture was that this male did not have a ring and so we must have at least two breeding pairs of these rare birds in a relatively small bamboo stand. This is a clear indicator of a very healthy ecosystem and very satisfying in that our efforts to protect the area appear to be having a very positive effect. Other exciting captures included a pair of White-tipped Doves (Leptotila verreauxi), a Greater Shiffornis (Sciffornis major) - a type of flycatcher- and several Green and gold Tanagers (Tangara schrankii). September will see us finish the last two transects, Roxanne and Anaconda Colpa, before taking a break until the wet seasons kicks in and we start the circuit again. 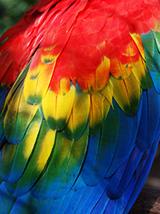 There was plenty of other work going on this month as well as we started to repair and raise the level of the dam. The higher level will create a much higher pressure of water and the idea is use this greater force to generate electricity next year when the river drops again. Still the work was made more interesting by the discovery of a largish Fer-de-lance snake (Bothrops atrox) during the construction work. The discovery of this highly poisonous snake understandably put everyone on edge to the point that the following day we found what appeared to be yet another fer-de-lance. Two sightings in quick succession were startling but upon closer inspection the second species turned out to be a very clever mimic. These "false" pit vipers have evolved to imitate their deadly cousins as a form of defence but we were able to identify it as not only a fake but also a new addition to our ever growing list of species.

We continue to work on the farm project, clearing trails, monitoring the flora and fauna of the reserve and much more. September will see us as busy as ever as we finish this phase of mist netting, start the construction of our new dining room, continue the maintenance of our animal enclosures and plenty more besides.